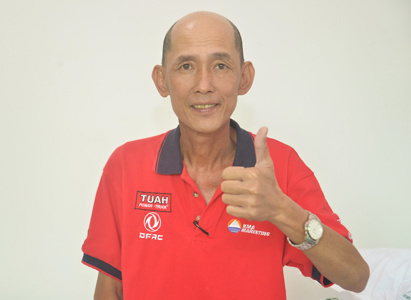 VOO CHEW WAH, 46 years old now, comes from Kuala Lumpur, Malaysia. In September 2015, VOO CHEW WAH found a mass on the right side of his neck, which was about 4cm. Since there was no discomfort, VOO CHEW WAH just took it as inflammation and took some Chinese herbal tea to control it. However, the Chinese herbal tea did not work, so he had to go to hospital for further examination. A lump was found in the right side of his nasopharynx when taking conchoscope. Biopsy result showed that VOO CHEW WAH got stage Ⅲ nasopharyngeal cancer. He has three children and his wife was going to give birth to his fourth child in October, he was really happy at that time. However, this happy life was broke by the bad news.

Although VOO CHEW WAH was sad, he quickly accepted the fact that he got nasopharyngeal cancer. Optimistic as him, he even comforted his wife and families. He told his wife to accept the fact and faced it with courage and easiness. He promised to his wife that he would pull though and see their children grow up. He told himself that children are so young that his wife could not carry such a heavy burden, he must cooperate with treatment and pull though it 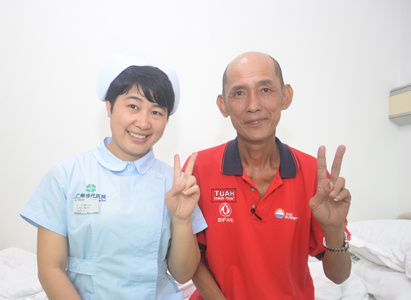 Moreover, VOO CHEW WAH shared his anti-cancer experience to other cancer patients: “Everything in life is impermanent; we never know tomorrow and accident, which will come first. Although we got cancer, we should never feel desperate in that we still have the chance to take treatment. The medical technologies now are advanced; we should take cancer treatment timely. Nobody wants cancer, now that we got it unfortunately, we should face with it bravely.” VOO CHEW WAH also mentioned his deepest feeling after he got cancer: to cherish the present. VOO CHEW WAH said he will give more love to his families, thank them for their support and care.