TJIOE SIN JEN: Thanks to Interventional Therapy, My Tumor has Shrunk by 90%* 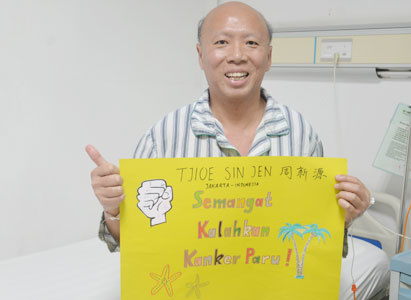 TJIOE SIN JEN, 47 years old, who comes from Jakarta Indonesia, is a brilliant teacher teaching courses of junior middle school and high school for computers, physics and chemistry. However, some bad things happened, which made him must leave his job temporarily.

In February 2016, TJIOE SIN JEN had been experiencing pain in his right chest and chest congestion frequently, so he had some checkups locally which showed that there was a tumor. On March, in order to confirm his diagnosis, he took biopsy in the hospital, which turned out a awful result that he was diagnosed with lung cancer stage 4 and the cancer cells already spread to other parts of the body. He was totally shocked by the unexpected results. As a person with regular habits, he doesn’t smoke or drink and exercise a lot. Besides that, he often register for Marathon and he also planned to attend the match in Mongolia this coming July. He had no idea that why he would get cancer.

His life was threatened, which made him so nervous and painful but what’s inside his heart is the passion to live. With the support and encouragement of the family members, TJIOE SIN JEN started to take medicines for cancer according to the local doctor’s advice. However, oral drugs is not a permanent solution after all, thus, TJIOE SIN JEN was trying to figure out a treatment that can offer him a truly healthy life. After careful comparison, he set his sights on Modern Cancer Hospital Guangzhou. He had went through the hospital’s website, noted that the hospital owing 18 types of minimally invasive treatments has passed JCI certification and there was a patient named ELANG MOCHAMAD who has the similar situation as his. All these have raised hopes to him. Therefore, He went to the branch office in Jakarta of MCHG. The staffs there help to deal with the visa and ticket issues. So on April 22, TJIOE SIN JEN came to MCHG. 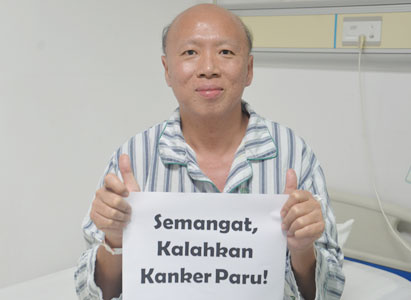 After arrival in the hospital, TJIOE SIN JEN had received a detailed checking which showed it was lung cancer stage 4 and the tumor measured 2.4*7.5 cm. Experts of MDT suggested interventional therapy after full evaluation. On April 25, he had received the first interventional therapy. He didn’t feel so nervous since the doctor already explained all the details about the treatment plan. This treatment had last 20 minutes, and after that, TJIOE SIN JEN didn’t go through too much side effects except ulcer. On May 19, he had undergone the second interventional therapy which had only last 10 minutes. After twice therapy, the pain in his chest seeped away gradually. Actually, these two therapies have fewer side effects. He could move around on his own after the therapy. On May 19, his attending doctor Wang Zenghai discharged him in the afternoon after he underwent his interventional therapy in the morning.

On June 5, TJIOE SIN JEN got his second consultation and received the re-checkup which showed that there were no more obvious tumors in his right lung and the tumor had shrunk by 90%. That is a really great news for TJIOE SIN JEN and his entire family. On June 8, he received the third interventional therapy and the doctor suggested one more interventional therapy to consolidate the treatment effects and prevent the recurrence.

This disease has thrown great influence on TJIOE SIN JEN. According to him, we can’t ignore the regular checkup since we may get ill even though apparently healthy. Thus, he cautioned the importance of early detection and treatment through regular checkups. He said, everyone should have the faith to survive. Modern Cancer Hospital Guangzhou will offer you good therapeutic effects just like what I received.

During the time in MCHG, TJIOE SIN JEN had attended “Anticancer Warrior”, had visit famous tourist attractions in Guangzhou, and had taken part in the Dragon Boat Festival activity on June 7. All these had drawn him out of the boring wards but received tons of fun. He told us that MCHG has great advantages comparing with hospitals in Malaysia and Indonesia since other place would be main on the traditional therapy like chemotherapy and radiotherapy, while there are more advanced minimally invasive treatments which cheer patients up. Besides, doctors and nurses there are so kind. He is moved by the good care of the staffs here.

Before received treatments in Guangzhou on April 22, TJIOE SIN JEN “ask for leave” to his students for the treatment. Now, coming with the encouraging therapeutic effect, he is full of faith that he can get together with his students and families. Let’s bless him.