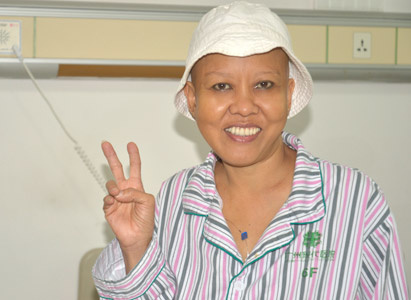 ONG CHOON MOY:“ No matter what kind of cancer you got, please be strong and confident. Treat cancer with normalcy, hold back the pain and defeat it.”

ONG CHOON MOY, an ordinary housewife, stays at home taking care of her two children. Her husband works hard to earn money to support his family. Although they are poor, they live a happy life. ONG CHOON MOY has been suffered from cough and stomachache since 2014. In the early stage, ONG CHOON MOY just took it as common stomach illness. However, the unbearable pain urged her to hospital to take further examination. Unfortunately, she was diagnosed with lung cancer. ONG CHOON MOY mentioned that fighting against cancer is so difficult that she almost give up. After witnessing the death of her friend who got cancer but gave up treatment, she told herself that under no circumstance can she give up, she must fight to the last moment. Her little son is only 13 years old and just enters junior school, she wants to restore to health and witness the growth of her son. She searched on the internet, aiming to find a better lung cancer treatment. Fortunately, she found Modern Cancer Hospital Guangzhou. At that time, a series of symposiums about cancer treatment were held by Modern Cancer Hospital Guangzhou in Malaysia. She decided to participate in the symposium held in Malacca. After the symposium, Professor Peng Xiaochi, the chief oncologist of Modern Cancer Hospital Guangzhou, gave her some therapeutic recommendations. However, considering about her economic condition and other reasons, ONG CHOON MOY did not came to China for treatment immediately.

Knowing that ONG CHOON MOY’s conditions become much better, her sister and mother started to support and believe the medical technology in China. ONG CHOON MOY mentioned that the medical technology in China is advanced than that in Malaysia. In Malaysia, there are only traditional treatments for lung cancer, such as chemotherapy, radiotherapy, etc. There is no cryotherapy, chemotherapy and other minimally invasive therapies in Malaysia. What’s more, the services in Modern Cancer Hospital Guangzhou are humanized; doctors and nurses here are friendly and nice. On ONG CHOON MOY’s birthday, doctors and nurses of Modern Cancer Hospital Guangzhou specially prepared ONG CHOON MOY a birthday cake for celebration. Although ONG CHOON MOY did not use to celebrate birthday, the considerate service of doctors and nursed made her happy and moved.

One year pasts, ONG CHOON MOY’s mentality changed a lot. At the beginning, it was hard for her to accept the fact; she even wanted to give up, but now she becomes optimistic and strong. It is her optimistic and strong mind that helps her fights against cancer bravely. ONG CHOON MOY told us that her families are the first people she wants to say thank you, thank them for their support and care. For her family’s sake, she will try her best to restore to health. ONG CHOON MOY also shows her gratitude to those people who always help her, thank them for their support. What’s more, ONG CHOON MOY also gives some encouragement to other cancer patients:” No matter what kind of cancer you got, please be strong and confident. Treat cancer with normalcy, hold back the pain and defeat it.” Here, we wish ONG CHOON MOY a quick recovery.